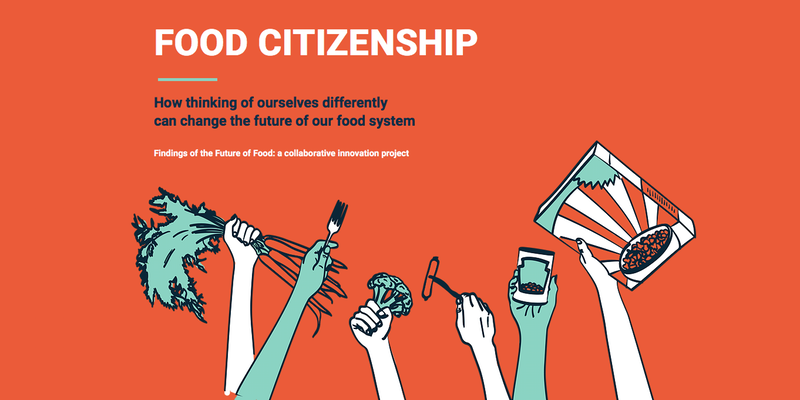 How thinking of ourselves differently can build a better food system

The result of a ten-month inquiry with six organisations including the RSPB and Co-op to explore a Citizen food system, the Food Citizenship Report explores the false and limiting idea of ‘the consumer’. The report includes a review of international and UK food citizenship projects, and a Food Citizen’s Toolkit.

The Food Citizenship Report is available for download at 9am on 28 June – please subscribe. Advance copies are available for all registered attendees 48 hours prior to the launch event. Advance press copies of the report are available on request.
The report launch on 28 June is an opportunity to hear from the six organisations about their progress towards a citizen food system, and the new approaches they are taking in communication, strategy and policy development as a result of their participation in the project.
The six Food Citizenship partner organisations are:

The Food Citizenship report is by the New Citizenship Project, a certified B-Corporation business with purpose, working with organisations on innovation projects which involve people as citizens not consumers. It demonstrates that by changing our mindset from consumer to citizen, we can create a genuinely participatory society.

Director and co-founder of the New Citizenship Project, Jon Alexander, explains how this shift can tackle problems in the food system:

“We allow sugar content to remain high, compromise on wage levels and environmental impact for price, focus our best innovation brains narrowly on convenience, and all because that’s what “the consumer” wants. But what if people are not consumers? What if brands sought our involvement, not just our spend? Imagine if we thought of ourselves and each other as active participants in shaping our society beyond our individual consumption. This shift in mindset reframes the task of creating a better food system. It is a future waiting to happen. And it starts with a single word: citizens.”

Jon Alexander continues: “We have applied the insights from our process and the work of our participant organisations to create a toolkit for others working in the food system, helping them to see how they as individuals and their organisations can be Food Citizens. This toolkit is an exciting opportunity for us to break out of consumer conventions and work towards a new food system which is fairer, more equitable and has a healthier future.”

The report was advised by the Food Ethics Council, an independent advisory body working for a fair and healthy food system.

Food Ethics Council director, Dan Crossley says: “By most indicators, the challenges faced by the food system are getting worse, not better. If we want a systemic change in the food sector – and beyond! – one of the issues that needs to be addressed is the language used when communicating with others. We need to move beyond the consumer and into the new era of the citizen.”
Food Citizenship report partner-organisations have their say

“Co-op is already in the Citizen mind-set in many ways – we exist to serve our four million active members, who own and have a say in how we are run. We were drawn to the New Citizenship Project as it promised to challenge us to use this structure to be bolder with our leadership campaigns and consider how to make the most of the passion and influence our active members hold. The New Citizenship Project did just this – it has pushed us out of our comfort zones and stretched us to think differently about the way we talk to our members and shoppers in order to ignite their citizen mindset, and our own. Ultimately, our vision is to make people shopping with us feel like they are buying into a movement, not just another shop and the New Citizenship team has provided us with tools to start this journey – something we’re extremely excited about.”

“This project has provided a huge amount of stimulus for the development of our campaigning on food and farming, complementing a shift in approach we already wanted to make. Recognising the limitations of a Consumer Mindset and changing our language as individuals has started different conversations internally; we are actively starting to build new alliances and we’re looking forward to involving our supporters in our work as we embed these ideas”.

“In some respects, at COOK we’ve shown it’s possible to operate and succeed outside the conventions of the food system and its prevailing consumer mindset. That said, we also succumb to consumer thinking because it can seem the only real option for driving business success. We are now more confident than ever that there is another way – one which can benefit both our business and society. We have started to see much more potential in this language shift, particularly with regards to communication of our brand to our customers”.
Oistein Thorsen, Director of FAI Farms, says:

“We see part of our role as advisors to some of the world’s largest food brands, to help them create meaningful platforms of engagement that goes beyond the transactional to make food producers a visible and valued partner in solving our time’s biggest food challenges. We have begun formalising this process by developing a guide for food brands; “Engaging Food Producers as Citizens”. The purpose is to begin to transform the dominant conversation in supply chains towards genuine strategic alliances. Much of the content builds directly on the ideas developed in this process.

B Corporation UK: the growing movement to use business as a force for good @BCorpUK